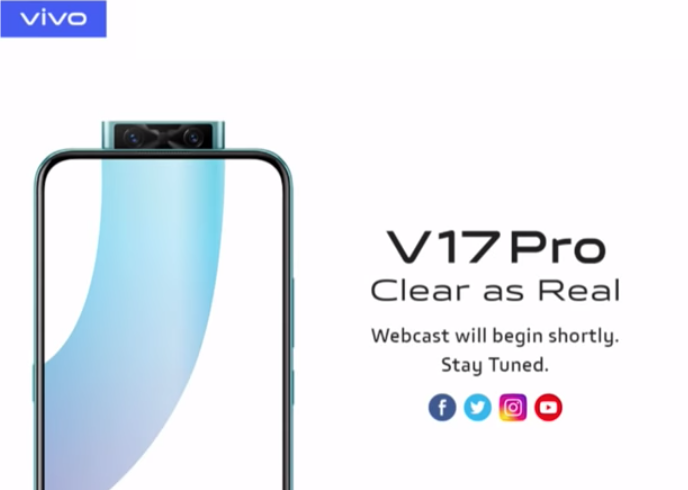 The Vivo V17 Pro is the follow-up to the V15 Pro earlier this year, which was one of the first few phones that brought features like a pop-up front camera, a notchless screen, and a triple camera setup to a mid-range device.

So let’s take a quick look at the new V17 Pro, and see what it has to offer this time round. The V17 Pro adopts a more symmetrical looking design with all of the cameras on the rear, and the pop up mechanism in the middle of the phone. It has a colour shifting back panel which seems to be all the rage these days, and it looks pretty nice, especially in this Crystal Sky colour option. While the frame of the phone still seems to be plastic, the rear panel is now glass, and the pop up camera seems to be using metal. It still feels really solid overall, and they do include a case in the box, so I don’t really mind the plastic frame.

Like the V15 Pro, the Super AMOLED screen on the V17 Pro looks really good. It’s slightly taller with an aspect ratio of 20:9, the colours looks nice, and outdoor visibility is decent as well. Being a notchless and almost bezel-less display, it’s just a really enjoyable screen to use no matter what I’m doing on the phone.

The optical fingerprint sensor under the screen still works really well too. Specifications wise, it’s mostly the same as what we got from the V15 Pro which might disappoint some folks. They also removed the microSD card slot as well, but it’s not a big deal to me since 128GB should be more than enough for most folks. On the bright side, at least the headphone jack is still here. While it would have been nice to have a newer chipset, the phone still performs quite well. It might take a bit longer to open some apps
compared to flagship devices, but other than that, it’s just as nice to use. Also, we do get a slightly bigger 4,100mAh battery which can get me through a day of heavy use easily, and we are finally getting a USB-C port here. So overall, considering that the price of the phone is lower than the V15 Pro at launch, I think this is still a small upgrade. When it comes to software, if you’re very
picky about software experience, you already know Funtouch OS isn’t for you. It has a bit of bloat, major software updates are not going to be as quick, and because the UI design has some influences from iOS, there is a bit of a learning curve if you’re coming from another Android phone. But other than that, I think it’s usable. It performs well, it has a bunch of useful features, and once I got used to having the Control Centre at the bottom of the phone, it’s actually easier to use one-handed.

Another nice little update from the V15 Pro is that it actually supports Widevine L1, which means I can now enjoy HD content from streaming services, which is nice. So while Funtouch OS isn’t my favourite,
after taking a bit of time to customise it and figure out how to get it to work the way I want to, it’s fine.

Which brings us to camera performance. Let’s start with the front cameras, since the V17 Pro is one of the first devices that I’ve seen with 2 front cameras in a pop up mechanism, along with an LED light. The main selfie camera performs really well in all sorts of lighting conditions, the colours isn’t always the most accurate, but it does a good job at keeping faces properly exposed. The ultra wide angle camera is one of the widest I’ve seen on the front of a phone, which is great for group selfies, but looks a little soft most of the time. For the rear cameras, the main camera is able to take decent looking images in most types of lighting conditions, and it’s an improvement from the V15 Pro for sure. Same goes for the ultra wide angle camera which seems to be able to capture more details, but it’s still not that great in low light. For the additional macro camera, because it’s just 2MP and when you are that close to a subject, the phone blocks out some light. So most of the time, I can get better looking results just using digital zoom on the main camera. The last camera is just a depth sensor for better background blur effect. Like most mid-range devices, camera performance is not as good as flagship devices, even if it does have like 6 cameras in total. But at this price point, I think it’s decent enough, especially for the main front and rear cameras. As usual, I’ll have a link in the description below with everything I took with the phone.

Overall, I think the V17 Pro is a nice improvement over the V15 Pro, especially in the areas that matters, like build quality, camera performance, battery life, and a USB-C port. Being a mid range phone, I’m not really expecting to see features like water resistance, wireless charging, or stereo speakers, but the rest of the phone is still able to come together to provide a good user experience. So if you’re okay with Funtouch OS, it is a pretty decent phone. That said, even though it is already a hundred Singapore dollars cheaper than the V15 Pro at launch, I still think that a better chipset or a lower price tag would have made the phone even more attractive. Especially considering how insanely competitive
this market segment is.

How to recycle old phones in Singapore