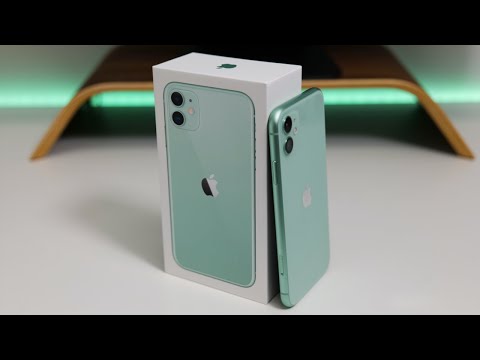 We unboxed a 128 gigabyte model and the box matches depending on which phone you get. The iPhone we have is mint green color but thankfully Apple calls it green. The box isn’t quite as tight-fitting as it has been in the past. Looking at the phone, there’s plastic on the front but not on the back so that’s kind of interesting, they’ve just left it undone. They’ve cut the box out to match the camera bump. The camera actually looks a lot better in person. It has a glossy back but the glass around the camera is not glossy so it’s kind of a matte finish. I liked it although it does look like a face. In the box you’ve got a Hello Guide, you’ve got sim card removal tool, a little warranty card and then you’ve got your Apple stickers. We do have the 5 watt charger in the box, so the 11 comes with the 5 watt. Then you’ve got some wired earpods that have the lightning cable on them. Those come with it if you don’t have AirPods or a different set of headphones that you like. The box also has the lightning to USB cable.

Looking closely at the phone itself, the phone feels very much the same as last year’s Xr. The Xr for comparison, they look the same except for the dual cameras, and size-wise they’re identical. The power buttons are in the same place, the volume buttons are in the same place as well as the silent switch, and the displays are the same as well. If we turn it on, we’ll wait for it to boot up.  It has stereo speakers and they should have a little bit wider sound now. Of course we have a new processor, we have a A13 Bionic chipset with about 4 gigs of RAM on the pro model. The display isn’t any different than last year so it’s still the 6.1 inch liquid Retina display 1792 by 828 with a pixel resolution of 326 pixels per inch. That’s the same as the iPhone 8 so the pixel density is the same and most people don’t really notice a difference with this display. The bezels on this phone do look large just like they did with the XR.

You usually get used to this pretty quickly especially if you have a case on your phone because the case normally comes over the side slightly so it’s not really a problem but for some people that may annoy you if you’re coming from say an iPhone X for example. The rear cameras get a pretty big update this year. They have dual 12 megapixel sensors that are all new and then we have an ultra-wide f2.4 and a wide F1.8. We also have the capability for 4k 60p with extended dynamic range. We can only do that at 30p last year. The front-facing camera gets an equally large upgrade with a 12 megapixel sensor F2.2 lens which is a little bit wider. It can also record in 4k 60 but also gets that extended dynamic range only up to 30 frames per second. It looks just like a XR. It has haptic touch, the screen is good for most people and honestly this is the phone most people should get. I do like how they’ve moved the Apple logo to the center, of course, you have the new cameras. The new cameras are a pretty big deal. They should be much better if we swing it around. You’ll see there’s a photo, portrait mode, and we should have 4k video recording as well from the front camera.

Let’s go back to the rear camera. If we zoom out, you’ll see it looks pretty good. I mean I captured a lot of what’s in the background and the detail is okay. We’ve got that new high key light mono, it’s making everything white in the background, so that’s kind of interesting. As far as wallpaper, we do have some new wallpaper. We’ve got some new live wallpapers. We have a few new ones and they match all of the different phones so if you have the green or you have the new purple. You still get that with the haptics as well.

They have light and dark mode versions. If you’re not familiar with, that you have dark mode turned on they’ll look a little bit different. A ton new with this phone, a faster processor which is significant, you do get an hour extra battery and also you get ip68 certification this time not just 67. It should be more water resistant as well although Apple never really covers water damage so just beware if you’re concerned about that.

Now as far as speed improvements, it’s going to be hard to tell that everything on a new iPhone is going to be smooth. For the most part, you’ll see it stuttered there a little bit but I’m installing a ton of apps and background information so it’s going to take a while to determine whether or not it’s superfast. It does seem to have four gigabytes of RAM which is fine. For iOS it shouldn’t be a problem but some people are going to point that out. I really don’t think it’s a big deal. The pros have this as well, as well as the larger iPad pro devices. So four gigs of RAM on iOS and never has been a problem and should be fine but again it will take a few days or so to know that for sure. If we go into the camera in the Settings, we’ll find that we got record video at 4k 60. It’s going to do that by default and then slo-mo we’ve got 1080p at 240 frames per second. It’s pretty good, I wish they’d move these settings into the camera app itself. It’s kind of a pain to go out and then come back.