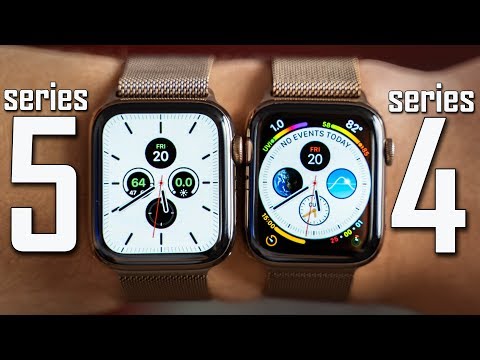 Today we’re going to be comparing all the little differences between the Apple watch series 4 and 5. If I just put them side-by-side, they basically look the same. We’re taking a look at both of cases and I literally cannot find any difference. By the way, it has gold stainless steel on both in the series 4 in the series 5. The band has the same color as before, just upgrading to series 5. I’ve got to say both of these series look really good. Definitely go with the chain link band that looks amazing with the same width steel.

So the series 5 is now set up and I have them both side-by-side and the display is off on the series 4 but you guys can probably tell that the series 5 has the always-on display. As I tap both of them, you get the bright white on the series 5 and when you turn them off it turns to black. You just get a very dimly lit watch face so you can see the clock all the time which is really amazing. I know a lot of people really wanted just one feature and that one feature was the always-on display. You can’t really get mad at Apple for not changing that much because this one thing alone is going to get a lot of people to upgrade or people to switch back to an Apple watch just for the always-on display. It’s a lot more convenient to be able to see the information and there’s another one that looks to be newest a gradient watch face.

Do you know now there is fake Apple series 5.

What it does is basically you have the seconds, minutes and hours and there’s this little shadow that moves even though there’s not an arm for the second. Pretty cool because if you look at it, it gets really dim but you can still see it when it turns off and we got all different colors that we can switch between. You can change the style of the gradient.

Here’s another one, it’s called their Meridian watch face. It just looks so classy especially with the always on display. You can change the dial color from black to white. It can change the colors of the text which is really cool.

You also get modular compact so you have a nice little layout which is perfect for weather and other complications that show more things on the display. You can change it from digital to analog which is cool and you could change the color. I like this large section for the complications because it shows a lot more than the small ones. Obviously, the main selling point of this series 5 is the always-on display. You think that because it’s always on that it uses up a lot of battery life and you’re going to get worse battery life than the series 4 but that’s actually not true because Apple did some trickery in there and they increase the battery life. Basically what they did is they allowed the screen to refresh from 60 Hertz down to 1 so because of that it’s saving a lot of battery life and they may have also increased the battery size as well. What you can actually do is you can go into the settings and you can turn off the always-on display if you want to. Most people probably won’t. You don’t have this feature in the series 4.

You have the options to hide sensitive complications so if there’s any complications with calendar appointments, messages or anything like that, it’s not going to show it it’s off so nobody can sneak and look at any sensitive information so you can turn that option on. Let’s say you’re using an app and you don’t touch it for a few seconds. What’s going to happen is that instead of turning off, it’s actually going to fade to darkness and the clock is going to appear. So the time just popped up instead of turning off and if you tap back it goes back into the app instead of being the watch face. If you let that happen and you turn it off, it goes back to the watch face.

Within the new Meridian watch face, we actually have the brand-new compass app that comes exclusively to the Apple Watch Series 5. I don’t know how many people are going to use it maybe if you’re adventuring in the wilderness but other than that there’s really not that much use for it to be completely honest.

When we allow it to turn off, it fades back, and the time pops up and comes back. In all reality unless you really, really, really care about the always-on display, there’s really no reason to upgrade. I think the processor is actually basically identical to the one in the Series 4. There’s not that much difference, it’s just that always-on display and the brand-new watch faces, other than that there’s really no reason to upgrade.

If you are on a budget, here are APPLE WATCH CLONE you can consider.