Today, let us relook into Redmi Note 7 again. It has been in the market for sometime now. But I just want to quickly share some of my thoughts on the phone after using it for a short while. We’ve come a really long way since the first Redmi Note, which I actually did review on my personal blog almost 5 years ago. While the price of the series has gone up a tiny bit, it’s still pretty amazing what you can get for under 300 Singapore dollars. 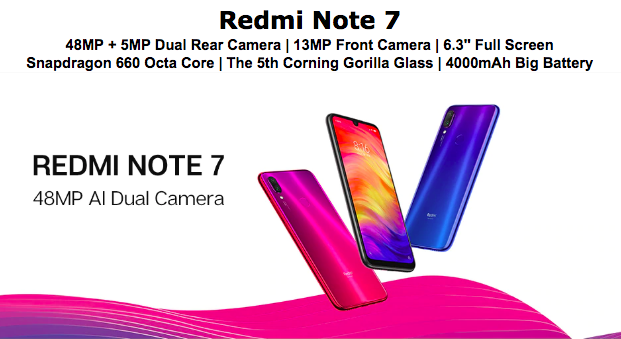 First of all, we’re getting a pretty attractive design, and decent enough build quality. Even though the sides are plastic, the back of the phone is using actual glass, which at least doesn’t scratch as easily. The front of the phone uses Gorilla Glass 5, and it’s a decent looking Full HD screen with relatively thin bezels. It’s not the best looking screen for sure, but it’s pretty decent for the price of the phone.

The same can be said about its performance. Snapdragon 660 might be a little old, but it’s still a really capable chipset, and it does comes with a good amount of storage and RAM. When it comes to things like gaming, unless it’s a really graphically intensive game, it will probably run fine on the Redmi Note 7. Apps do take a bit longer to load, but it’s in line with other phones with this chipset. I do see some minor stutters and dropped frames in the animations from time to time, but nothing serious. It’s probably just because of how heavily customised MIUI is. It doesn’t really hinder the user experience much in day to day use, and MIUI does have some useful features like most other heavily customised software from chinese manufacturers. So I don’t think it’s a big deal. To me, the more annoying things are the built-in apps asking for permissions that I think they don’t need, and to a smaller extent, the ads in the music player.

I know Xiaomi has to make money somehow, and you could turn it off in settings, but it’s just a bit annoying. Anyway, let’s talk about something more positive. I was actually quite surprised by how nice this camera is. Typically, this is where a lot of phones in this price range falters. I know it says that it’s a 48MP camera, but it’s really more like a 12MP camera because of the way it really works. But that doesn’t really matter to me since the camera was better than I had expected.

While I think that Xiaomi’s style of image processing doesn’t retain fine details as well, overall images are still quite pleasing to look at. Auto HDR works well enough, and colours looks pleasing too. It’s pretty much the same for low-light shots with the camera being able to produce pleasing looking shots, albeit with slight loss of finer details. It has a reliable enough night mode as well, and for sharing on social media, I think it looks good enough. The selfie camera is surprisingly nice as well. I think the colour could use a bit more saturation, but it’s able to capture really nice details. Video capture is only in 1080p which is a strange limitation with the built-in camera app, but it looks decent enough with software stabilisation.

Which brings us to the miscellaneous stuff. So like most Redmi devices, it comes hardware features like an IR blaster, a headphone jack, a hybrid dual sim / microSD card slot, and even a notification LED. It also has a 4,000mAh battery which is more than good enough for a day of really heavy use. I also like that it’s using a USB Type C port as well. But this is a low end phone after all, so no need to even think about things like stereo speakers or what not. But all things considered, the single firing speaker sounds pretty decent and gets loud enough too. However, I do have to specifically highlight the lack of NFC, even though it’s kind of the norm for Redmi devices. The thing is, we are now able to use Google Pay for public transport here in Singapore, so the lack of NFC is a bigger deal to me these days. But other than that, I think the Redmi Note 7 is a really nice phone that punches above its price point in most aspects. The design is nice, the hardware is good, and the camera is better than expected.

So yeah, if you’re looking for a phone around this price point, and you’re okay with MIUI, the Redmi Note 7 is a pretty good option.